I get a lot of questions about what is the best way to set up a Google AdWords account for funeral homes – and I have seen a lot of AdWords accounts that haven’t been set up properly, so here is what I recommend…

Need help with your Google AdWords account for your funeral home.
Join Hepp in Cleveland for the Funeral Bootcamp. 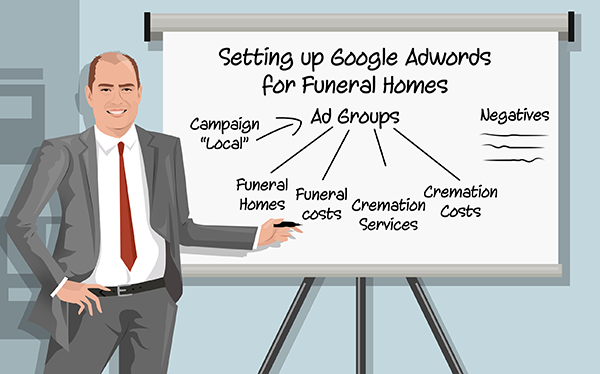 Hi, this is Robin Heppell from FuneralFuturist.com, and welcome to “The Funeral Strategy and Marketing Show.” This is a little video that I’m going to do on a regular basis so that I can share with you and other funeral professionals just some of my experiences, tips, and strategies for you to have your funeral home more strategic, more competitive, and win more calls, serve more families. That’s what it’s all about to me is, if I can help you serve more families, and if you provide better funeral services than your competition, then I believe my job is being done. I think that’s awesome.

What we’re going to talk about today is setting up Google AdWords. Google AdWords is a very effective marketing tool. It allows you to get in front of people who are searching for funeral homes and cremation services. The great thing is, you only pay for when someone clicks on your ad. Unlike the yellow pages or any other type of marketing you pay upfront, this is what they call pay per click, so you only pay when someone clicks on your ad.

Now, the first thing you’re going to think of is, “Hey, I don’t want my competitor clicking on my ad.” Sure, none of us do. The reality is that’s going to happen a couple times, but if it happens a lot, a couple things happen. One is that Google can track click fraud. [laughs] It’s not much of a tongue twister. They can track click fraud. They can then either reverse those charges don’t even worry about that.

What I want to talk about today is just setting up your Google AdWords campaign. Throughout the whole process now, we can get into writing the ads and creating the landing pages and things like that, but just the setup. People can do a good job, and they can also do a real crappy job. Let’s get you off on the right foot here.

I just want to, first of all, mention, we want to make sure that our campaign isn’t too broad. Then we’re going to look at making sure that we have specific ad groups. Also, we don’t want to forget about setting up negative keywords.

In that market, you set it for a certain radius. Maybe it’s a 15 mile radius, a 10 mile radius, whatever it is in your market. If you have multiple locations, maybe you’re going to cover all of them, or if they’re in different towns, you may want to have, then, two campaigns, where you cover one radius around this town and then another radius around another town, but we’ll get into that a little bit later.

Then what happens is, inside your campaigns, you set up ad groups. This is another problem that I see happen is, funeral homes will just have ad group number one, because that’s the default title that Google puts on there. If I see campaign number one and an ad group number one, I know that people haven’t really put a lot of thought into building up their campaigns.

Now, one of the problems is people then dumped all the keywords all in that one ad group, and then they drive them all to one page their home page, which is a bad choice. What I like to do is, after I’ve created the local campaign, inside of that, I make four ad groups. The four ad groups are funeral homes, funeral costs, cremation services, and cremation costs.

Why I break those apart is that then I can put all of the searches for when people are searching for a funeral home or mortuary or funeral directors in a specific location. They then show ads that just talk about that. If a death has occurred, you can call us, or visit our website or download our resource kit. It’s a bit more generic.

If someone’s looking for funeral costs, then you can have a more specific ad and actually drive them to a more specific landing page, where you’re going to be having a different conversation, more about costs. The same with cremation, instead of having all of your cremation keywords lumped in with your funeral keywords, they’re different as well, so I like to break those apart.

If you don’t have a pet service like a pet crematorium service, then you don’t want to rank for pet cremation in your market.

If you didn’t put “pet” in as a negative keyword, then your ad may show up and someone may click on it and you’re just wasting money because you can’t serve that person. If they don’t click on it, you’re just making the ad look like it’s not as good because your click through rate is going to go down. The number of people clicking on that ad…if zero out of 100 click on that ad, then you have a zero percent click through rate.

What we look for and try to go for is average anywhere from, the more general terms like funeral homes, three to four percent of click through rate, even up to five percent.

From there, I would just duplicate the local campaign number one, then name it for the new market. You can go into the AdWords editor…You can actually do find and replace. You’re going to clunk around for a little bit, but don’t worry, if you make a mistake, it doesn’t happen automatically. You’re not uploading those back to your account. You can actually just start all over again and work with it.

What I’d do in this case is after I’ve copied it, do a fine and replace. If I was, say, here in British Columbia, I had a campaign for…this would never work because we’re separated by a body of water.

The reason why we put that into two different campaigns is because at the campaign level is where you set your geographical boundaries. That’s why I would do it from a campaign perspective if you’re doing two different markets.

As you set up your market for the different topics, we’d then go into the different ad groups. From there, we’re going to put in our keywords and write at least two ads per ad group, so that we’re always split testing to see which ad works better.

Hopefully, that gives you a quick overview of how to set up your account. If you want more information on that, I’ve got a special website called, “Funeraladwords.com.” There are some videos on there, you could also go to my YouTube channel and there’s a whole bunch of marketing Q&A questions in there and a lot of them pertain to Google AdWords.

I hope you like this new way of me communicating. I’m still going to do our screen capture videos that we put up on YouTube. They’re more of an onscreen tutorial.

For these ones, I thought, “This is a little bit better.” I’m not hiding behind the screen, I’m here speaking with you. Let me know what you think. You can leave a comment below. Also, make sure that you subscribe to this on iTunes.

Speaking of that, we’ve just launched my scientific advertising audio book on iTunes. You can actually download the entire book for free. This is where I have read aloud the book, “Scientific Advertising,” by Claude Hopkins.

Plus, I’ve given about a one hour interpretation of how are the dots connected for funeral service. If you want, carry me on the go. The good thing about this, you can set it, especially if you have iPhone, you can go two times the speed.

If you don’t want to listen to me or you want to condense it, just go up from one times to one and half or two times. I’ve created this DVD set that people can purchase, or sometimes, I give it away when I’m speaking at a conference.

Now, you could also just get it for free. You can go to iTunes and search for, “Funeral advertising,” or “Robin Heppell” under podcast and it will come up. This is actually the book. “Scientific Advertising” was written in 1923, by Claude Hopkins. It’s an amazing book and there are such gems in here and they’re still true today. I think you’ll enjoy it.

There are lots of great nuggets of how I’ve interpreted it and how it can help your funeral home. Just go to iTunes and search for Funeral advertising, or Robin Heppell and you’ll see it.

Download it for free, listen to it and if you don’t want to listen to the entire two and half, three hours, just hit it on two times and it will be just over an hour. It is pretty heavy stuff, so you may want to absorb it a couple of times.

Also, I just wanted to let you know that it’s going to be a real busy fall. It means that my summer is going to be busy. It will be relaxing here in the Pacific Northwest, enjoying our nice, mild summer weather. I just want to let you know what’s coming up, the Funeral Bootcamp, which is September 9th, 10th, and 11th in Cleveland, Ohio.

That’s where we’re going to be talking about building your web presence and everything that you need to do to maximize that online, whether it’s SEO, how to integrate your social media, how to use social media to its maximum effectiveness without going overboard, and reputation management, how to get a lot more positive reviews and how to put that into your system at the funeral home.

Then, in November, I’m having my second Funeral Rockstars event. This one is actually going to be about competitive strategies. I’m really looking forward to that. It’s going to be at Planet Hollywood, right on the strip. The people that were at the last one had a great time and I’m looking forward to seeing them and hopefully, you there at one of those three events.

Once again, thanks for allowing me to have a little bit of your day and we’ll talk to you real soon. This is Robin Heppell from FuneralFuturist.com.

Leave your comments below…

How To Deal With Negative Online Reviews

Robin Heppell, CFSP, combines his expertise in marketing & technology and pre-need, his formal business knowledge and his deep-rooted legacy in the funeral profession so that he can help funeral homes and cemeteries be more competitive, more profitable, and provide the best possible service for the families they serve. Connect with me on Google+.

WHY OTHER WEBSITES FAIL YOU

Sign up for the Future of Funeral Service Newsletter

Get tips and strategies on...

Enter your email to get the latest tips,